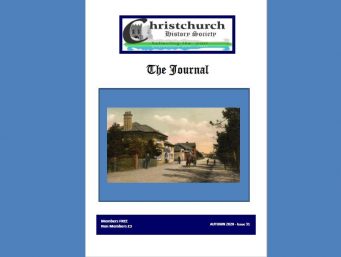 The Autumn 2020 Journal is available, and continues the life story of Allan Francis Harding, Lord Harding of Petherton, who became the most senior officer in the British Army. Here it tells his story from after surviving active service in WW2 through to his death in 1989.

Also in this edition there is reference to other epidemics this country has experienced over recent centuries, together with news of how towns such as Christchurch handled lockdown of the time. There is an article on the BAC 1-11 airliner and the involvement locally in manufacturing it, and another on the Bournemouth Belle train, which passed through Christchurch beginning in 1931 and later became a daily service.

One hundred years ago, two members of a London Branch of the Church Lads’ Brigade lost their lives swimming at Mudeford whilst on a camping holiday here, and their story is told. Aerial photographs from this century show Sopley Camp at Bransgore, and Sopley Village.

In this edition of the Journal you will find another article created by Mike Kearley.  It is the first part of his full article, which covers nine pages, so it has been cut in two. The second part will appear next quarter.

Other articles have the flavour of Highcliffe associated with them. One is about a person who resided the latter part of their life in the village, although had travelled a great deal. Another covers one of the large old houses and its associated inhabitants. The third covers the visit of a future British King to the area at the start of the twentieth century.

The main photographs included this quarter are all aerial views. For those needing a few words to accompany the views, these have been placed nearby the photograph.

We always welcome any input to the Journal from any member able to provide a few lines,

The Spring 2020 Journal continues the story of a soldier during World War II. The last Journal told of his training in the UK for D-Day. This Journal tells of what occurred after landing in France. Margaret de Redvers lived in the 13th century, and there is an article about research that was carried out on her. During World War II, RAF Ibsley airfield was built just north of Ringwood. A propaganda story was partly filmed there, and some of the story is covered. A reproduction of part of the story that was produced for the Book of Christchurch and that covered the opening of Christchurch Workhouse in Fairmile Road, part of the story of railways in the area of Christchurch, and a timeline for the Old School in Highcliffe complete the articles appearing in this edition. Photographs appearing include one of the High Street at the time of the 1911 coronation, plus two aerial views, one of Bargates, and the other of Fairmile.

The last Journal of 2019 includes yet another article from Mike Kearley, this time about his father’s experiences at the time of World War Two. It is in two parts – the first here, the second to follow.

There is an update on the survey of Druitt Gardens, a look into how Tuckton bridge came into being and a few words about the life of former Mayor Eric Spreadbury (following his family’s large donation to the Society’s archives). The centrefold picture is an aerial view of the old barracks.

There are two articles that accompany archive photos, the first on the 1953 demolition of the High Street ‘roadblock’, the second on two pictures used by Allen White, and an article on historical welfare in Christchurch.

Registered members can view the above Journals within the members’ page, and download copies as required. The website will retain the last four editions of the Journal, so that the Autumn 2019 edition has been replaced by the Autumn 2020 edition.