John Neville Manners followed a tradition in wealthy British families, and entered military service. He was the son of the third Baron Manners of Avon Tyrrell, Hampshire, and when War was declared at the beginning of August 1914, he was a Second Lieutenant based in Chelsea with the 2nd Battalion Grenadier Guards. 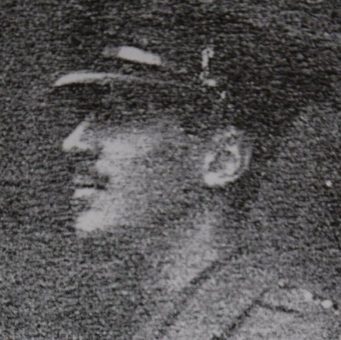 On the 15th August 1914, they formed part of the British Expeditionary Force and moved to France, landing at Le Havre.

On August 20th the British Expeditionary Force took up its position alongside the French 5th Army. Within hours, the German army was confronting them. Five Divisions of the British Expeditionary Force, about 70,000 men under the command of Sir John French, faced 14 German Divisions, about 160,000 men, on a 20 mile front along the Mons-Conde Canal. These German units were just the vanguard of an invasion force of 38 German Divisions thrusting towards Paris.

The Germans attacked at 06.30 on 23rd August. The British Expeditionary Force were experienced troops who had been involved in many hard-fought engagements all over the British Empire. They were well dug in, with 11 Corps under the command of General Smith-Dorrien on the West, and 1 Corps, which included the 2nd Battalion Grenadier Guards, under Douglas Haig to the East. The Cavalry division was in reserve. The Germans made little progress against the sustained accurate rifle fire of Smith-Dorian’s men and indeed, the sudden order for withdrawal of the British Expeditionary Force was met with disbelief by many of the men. However, the force against them was overwhelming, and the British Forces began a slow withdrawal to a second line of defence. This was the great retreat from Mons, which lasted until September 6th.

On the evening of 31st August, the 4th Guards Brigade including the 2nd Battalion Grenadier Guards and Lieutenant Manners, had halted to the north of a great forest around Villers-Cotterets. After days of marching in hot weather and with little sleep, they were ordered to form a rearguard to protect the withdrawal of the division. The 2nd Battalion Grenadier Guards and the 3rd Coldstream Guards were entrenched between Soucy and Mont-Gobert. The German attack began at 10 am the next day, the 1st September. The Guards’ forward positions came under heavy artillery and rifle fire, and they were forced back into the wood and dense undergrowth. These conditions, combined with a morning mist, led to a lot of confusion, and by mid morning all units were engaged in close quarter fighting in the woods. During the course of the morning two platoons of Grenadiers were cut off and overrun. It was during this action that Second Lieutenant J. N. Manners, Second Battalion Grenadier Guards, is believed to have been killed.

British losses at the battle of Mons were 1,600 men and it is believe that Second Lieutenant Manners was the first soldier from Christchurch to be killed in the First World War. He was 22 years old. 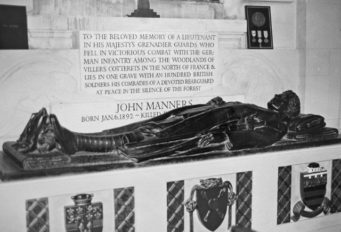 His body was never identified, so he has no known grave. His name is recorded on the Memorial at Ferte sur Jouarre on the south bank of the River Marne, 40 miles east of Paris, together with the names of over 3,700 allied comrades who lost their lives defending the area. In this country a bronze effigy of him is found within the All Saints Church, Thorney Hill, and his name is recorded on the War Memorial found in the Church grounds.

AT PEACE IN THE SILENCE OF THE FOREST