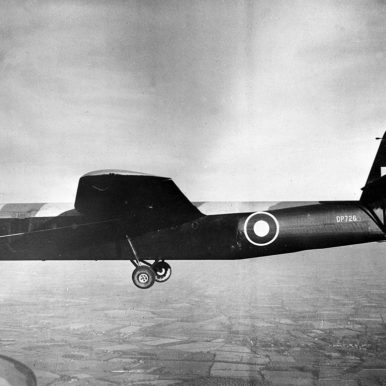 The presence of gliders and gliding in Christchurch occupied only a relatively short time in the town’s recent history.  It is  therefore the more surprising that in our family we have been involved in both of them in successive generations.

In 1940 my future mother-in-law the late Mrs Kitty Sargeant, who died in 2013 aged ninety five,  was a newly married housewife living in Walkford, but two years later she was helping the war effort by building gliders in the recently built Airspeed factory (later De Haviland ) close by in Somerford .  The gliders Kitty was helping to build were Horsas designed for airborne landing troops.  They were flown by a crew of two usually from the Army Air Corps.  They could be towed by bombers such as the Halifax or by transport aircraft such as the Dakota.  They were first used in the Allied landings in Sicily but more famously on D Day and the ill-fated Arnhem operation and the crossing of the Rhine in 1945.

The gliders were of all wood construction and in the manufacture of the fuselages Kitty would recall how she and her fellow workers, many of whom became life long friends, had to build them using thousands of tiny brass tacks.  They drove the tacks in with small hammers, like toffee hammers and the tacks were so small they had to hold them with tweezers.  As part of their training they all had to make their own tool boxes and these were then critically examined and it was only if the workmanship was of a sufficiently high standard they were allowed to move on to the actual glider construction.

Although Kitty, who lived all her married live in Walkford, remembered those times with affection, there were drawbacks such as having to sometimes squeeze into very confined spaces to work.  Obviously to maximise the rate of production of these very important aircraft there was round the clock working, and another of the less pleasant aspects of the job Kitty remembered was that on alternate months they had to work twelve hour night shifts from 8pm to 8am.  She said that it was alright until 6am but then the next two hours always seemed like an eternity!

My own involvement with gliders at Christchurch was by way of the Air Training Corps 622 Squadron Gliding School on Christchurch Airfield, the same airfield that Kitty’s Horsas had been flown from fifteen years before.    This now forms the very large housing estate between Friars Cliff and Somerford,

As an air cadet from Brockenhurst Grammar School Combined Cadet force I carried out my glider training in the spring of 1959 flying the Slingsby T31. A tandem dual-control glider.  These gliders were kept in the squadron hangar on the south side of the then unmade up Mudeford Lane.

These gliders were winch launched with the pupil in the front cockpit and the instructor in the rear.  A steel cable attached below the nose was pulled in by a high-speed winch on a lorry at the other end of the airfield and at an altitude of about one thousand feet  you pulled a large yellow knob on the left of the cockpit and this released the cable, its rate of fall being arrested by a small parachute fluttering down.  If you did not release the cable in time it would eventually release automatically but it was considered pretty bad form to let this happen! After releasing the cable the training programme required us to complete a rectangular flight path before landing, making our approach from the other end of the airfield .  The landing was onto the single wheel mounted beneath the centre of the glider and you then wrestled with the joy stick to keep the wing level until the speed dropped sufficiently to let a wingtip touch down.

My gliding log signed by the then Commanding Officer, Squadron Leader Hayter, shows that I did over thirty dual flights with an instructor before doing my three consecutive solo flights in the Whitsuntide holiday of that year .  It was a moment of great excitement and some apprehension when, after the last dual control landing the instructor stepped out of the rear of the cockpit and then leaned in and snapped shut his empty harness, meaning that you were going up alone for the first time.

On the last weekend of my basic training one of the few gliding accidents occurred .  A senior cadet returning from a soaring flight had misjudged his approach and came in too low.  His glider just skimmed over the bungalows on the other side of Mudeford Lane then disappeared from sight before cart wheeling over the tall hawthorn hedge onto the airfield.  The glider was badly damaged but the cadet pilot was very fortunate to have suffered only a grazed leg.  In the very best traditions of the Royal Air Force he was immediately strapped into another glider and sent up again to complete another flight, before he could dwell on the accident and possibly lose his nerve.