The first line of this Victorian saying was still adhered to in the 1940s.  Mondays, in our small bungalow in Windsor Road, meant a steam-filled kitchen with reek running down the windows, every surface damp and Mum dressed accordingly with a full-length pinafore over her skirt and jumper, wellington boots on her feet and her hair tied up with a scarf.  Winter or summer it was the same.  The only change from the way her mother and grandmother had washed was the way she heated the water.  Instead of lighting a fire under a range or copper, she lit the dining room fire to heat its back boiler.  Then an aluminium bath was filled from the tap and put to boil on the top of the grey enamelled gas stove.

A Reckitts blue bag was added to the whites so they stayed that way.  The soap came from small packets labelled “Rinso”, Persil”, or my favourite the black and orange striped “Oxydol”.  During the boiling, the sheets, towels and tea-towels were constantly prodded and moved around with a pair of wooden tongs. The hankies were boiled separately in an aluminium pail.  All clothes made of cotton were washed in the same way, though the temperature was kept just below boiling point.  More delicate items were washed by hand with soap flakes in the deep pot sink. 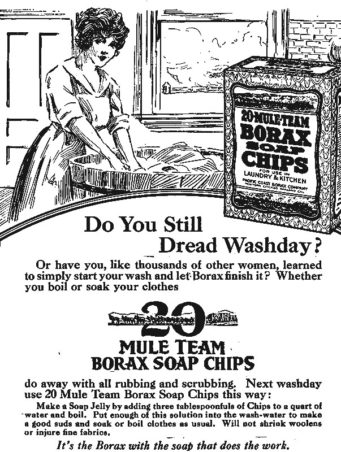 Advertisement in the 30th March 1918 issue of Country Gentleman Magazine.

After twenty minutes boiling, the bath of clothes was man-handled over to the draining board and levered up so that the contents fell into the sink.  This was the dangerous part.  The small kitchen was by now filled with steam and the lino on the floor was slippery.  But I don’t remember any accidents.  It was a job Mum was very used to!  The hot clothes were rinsed in two or three changes of cold water and squeezed roughly by hand before being put through the mangle, which stood on the floor.  Mangling was a two-handed job.  The left hand fed the folded clothes through its two eight-inch diameter rollers, whilst the right turned the big iron handle.  Again there seemed to be a great potential for mangled fingers, but Mum was very careful.  Perhaps this was why children had to be so well disciplined in the nineteen-forties.  If we had needed constant attention, it could have been very dangerous.  As it was, we kept out of the way and knew not to shout for a drink, or plead for a “go”.

Tablecloths, hankies and collars were starched.  The white powdered starch was mixed to a cream, then stirred with boiling water to a glutinous clear  liquid.  The articles to be starched were then steeped for five minutes or so.  This was before the days of collar-attached shirts.  A clean collar attached to the back of the neck with a stud prolonged the life of a shirt.  Furthermore, the starched surface repelled the dirt, lengthening the wear ability still more.

If the day was fine, the clothes were hung out on two lines. – thin tough ropes strung between two wooden posts, one from the house to the corner of Dad’s shed and the other at right angles to it where the clothes would catch the wind.  Some people had pulleys for moving the line up and down, but we relied on a long wooden prop.  The clothes were secured with wooden pegs joined by a steel band and sold by the New Forest gypsies.

The weather had to be watched carefully.  The threat of rain saw Mum rushing out to bring everything in to be hung, steaming and smelling of soap, on clothes horses all round the very small house.  A windy day was a mixed blessing.  It was fine for drying the clothes, but gusty conditions would often wrench the clothes off the line and onto the muddy garden.  The real disaster was when the line broke, as it did about once a year.  Not only would the whole lot have to be re-washed, but also somehow a new line had to be afforded.

When, by about half past eleven the washing was on the line, the kitchen had to be tidied up and dried out so that the potatoes could be peeled.  Monday’s menu never varied. It was always cold meat from Sunday’s joint with mashed potatoes and pickles or beetroot.  A meal I still hate and never serve!  But Dad’s lunch hour was fixed from 12.30 to 1.30 and everybody ate at midday then.  Fast food, apart from fish and chips was unheard of and tinned food was not considered nutritious so there was no alternative.

All the problems of washing day meant that clothes had to be kept clean as long as possible. Little girls and their mothers covered their clothes with pinafores whenever possible.  Knickers, socks and blouses were worn for two or three days; liberty bodices and vests lasted a week and pyjamas for fortnight.  Sheets were “topped and tailed” – one clean sheet was put on the top each week and the used sheet relegated to the bottom.  That way the number of dirty sheets was halved.

I wonder if, in the cause of combating global warming, we shall soon be urged to go back to these clothes wearing habits.