You are here: Home>Articles>Social History>Portrait Miniatures of the Daughters of Lord Charles and Lady Elizabeth Stuart de Rothesay

I have a family member who dabbles in buying and selling portrait miniatures, those tiny miracles of painting that were used to capture the likeness of “loved ones” before the age of photography. He recently sent me images of a pair of fabulous portraits that he had found (and reproduced on this month’s front cover). They feature two elegantly-attired and beautiful little girls and were painted by E Thomson in 1822. One portrait has Countess Canning written on the back, whilst the other is marked Marchioness of Waterford. He asked me whether I knew who the sitters were. Well, you can imagine my delight – of course I knew who they were! The daughters of Lord Charles and Lady Elizabeth Stuart de Rothesay of Highcliffe Castle. 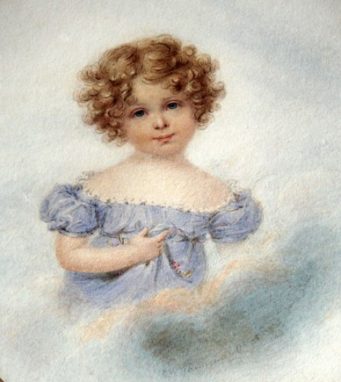 Charlotte, future “lady of the bedchamber”. Painted by Thomson in 1822

Lord Stuart was Ambassador to France between 1815 and 1824 and both his girls were born at the British Embassy in Paris. Charles must have proudly commissioned the portraits from Thomson who, although British, was working in Paris at that time from 45 rue St Anne. The Stuart’s eldest daughter was Charlotte (1817-1861) and their youngest daughter was Louisa (1818-1891).   As the portraits were painted in 1822, the girls were just five and four years old respectively. Only two years later Charles was recalled from Paris and the family settled at Wimpole Hall, near Cambridge, and – when it became ready – Bure Farm, near Highcliffe.

When Charlotte was 18 she fell in love with Charles Canning, son of George Canning, and they were married in 1835, eventually becoming Viscount and Viscountess Canning. In 1842 Charlotte became a “lady of the bedchamber” to Queen Victoria and served as a “lady in waiting” for thirteen years. During these years Charlotte began to excel in drawing and painting, her watercolours remain in the Royal Collection at Windsor. In 1856 Charles Canning was appointed Governor-General of India and they moved to Calcutta, where they became caught up in the Mutiny of 1857. In 1861 Charlotte became seriously ill after a visit to Darjeeling just before they were due to leave for England. She is buried at Barrackpore, outside Calcutta. 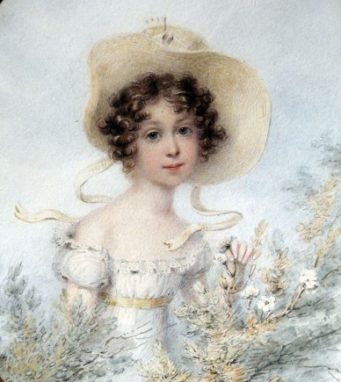 Louisa, was a talented painter in watercolour. Painted by Thomson in 1822

Louisa “came out” in 1835 and she was painted by Hayter, who noted her dazzling beauty. She too was a talented painter in watercolour. After studying in Italy, she fell in love with Henry de la Poer Beresford, 3rd Marquis of Waterford – a boisterous “madcap daredevil”. They were married in 1842 and settled at Lord Waterford’s home, Curraghmore, in southern Ireland. Louisa was deeply religious and did many “good deeds” and had two new churches built. She witnessed at first-hand the tragedies of the famine. On a visit to England in 1848 she struck up a friendship with G. F. Watts, founded on a mutual respect for each other’s art. In about 1853 she became an acquaintance of Ruskin and, through him, met many of the Pre-Raphaelites whose work she admired. Tragedy struck in 1859 when Lord Waterford was killed in a hunting accident  and Louisa had to move to Ford Castle in Northumberland. Highcliffe Castle came to her in 1867, when Lady Stuart de Rothesay died, and she used it as her summer home from then on. She continued to paint and draw, mostly around religious themes. She passed away in 1891, following a visit to  Osborne House.

It is poignant to reflect on the images of these two small girls, with their innocent smiles and gleaming eyes, who went on to achieve so much and lead such rich lives. Perhaps it was the experience of visiting Mr. Thomson’s studio that kindled their shared love of art? The history of the miniatures is not known, but it is interesting to speculate on their journey through the years and to marvel at their survival. It is particularly gratifying to have found them and to be able to reproduce them here. Let’s hope that they find a safe and secure new home.