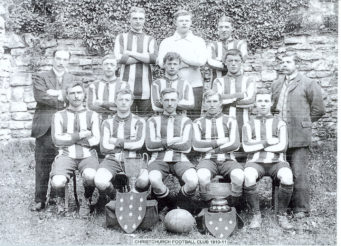 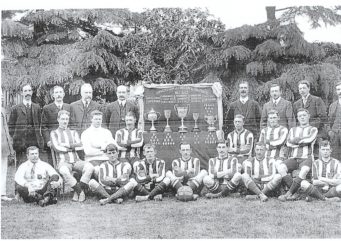 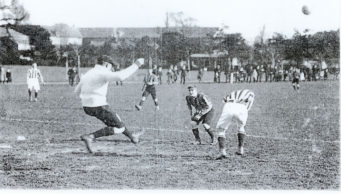 The Christchurch Football Team in Play

Dating originally from 1885, Christchurch F.C. had it seems, from April 1907, gone temporarily out of business. Within a short while of re-forming in August 1909, the Christchurch Football Club was making a fresh name for itself. Tom Kelly’s intriguing and informative history of the Club tells of the impact that Christchurch’s “Can’t Whack Ems” made in season 1910-11 and after. During 1910-11, Christchurch “A” team won each of the twenty-two matches in Bournemouth and District Junior League Division Two, with a goal tally of one hundred and thirty one for and eleven against, while the “B” team claimed the 3rd Division title. Having also won a cup and medals at Pokesdown’s Tournament, there was just cause for congratulations at the end of season Dinner at Christchurch Town Hall when trophies were on show.

Also of satisfaction would have been the knowledge that while expenditure for the season amounted to £70, that figure was more than matched by receipts of around £80.

The continuing progress of Christchurch Football Club during 1911-12, culminated with the winning of five cups and six sets of medals. The Hampshire Junior Cup Final at The Dell, Southampton, saw Christchurch beat Newport United 3-0, then enjoy a rapturous reception on arriving back at Christchurch at 8 o’clock that evening. On another day, kick-off scheduled for 5:45pm, Christchurch became Page Croft Charity Cup holders with a 4-0 victory over Bournemouth at Dean Court.

Of further 1911-12 attainment, Christchurch were Bournemouth League Division One champions as well as winning tournament cups at Lymington and Pokesdown. With two prolific goalscorers in Len Newell and “Ginger” Dunford, Christchurch’s remarkable revival owed much to a high level of co-operative effort on and off the field.  The last weeks of the 1911-12 football season were overshadowed by the loss at sea of the Southampton based super liner the “Titanic”. Keenly felt throughout Hampshire and Dorset, as elsewhere, collections were taken at matches during April 1912.

Honours were shared in Bournemouth’s 1912-13 season. Boscombe took the Hampshire League’s eight-team West Division title. Carters United were Bournemouth Division One champions. Charminster Road Congregational won the 2nd Division at their first attempt. Bransgore, with 24 points from 14 games, were Western Forest League winners. Boscombe beat Christchurch by the only goal of the Page Croft Cup Final, adding to Christchurch’s disappointment at missing out narrowly on the Bournemouth League Championship.

Christchurch’s press correspondent “Junius” was generous in his praise of the club’s Recreation Ground pitch, thanking the Town Council and commenting “that the Surveyor has kept a beautiful green for our lads to play on for four seasons.”

Football during the 1900’s, certainly up to 1939, was able to play a valuable role in bringing together different factions of a community.  Christchurch is a good example of a town where this was so.