Following David Eels’ article on The Mysterious Death of Baldwin de Redvers, he promised an article on Thomas Wriothesley (pronounced Risley) and what he held in Christchurch.  Those who attended David’s talk to the Society on the Constables of Christchurch Castle in December 2006 will remember that he spoke about Wriothesley and showed several slides of his magnificent tomb in Titchfield Parish Church.

Unlike the majority of the Constables of Christchurch Castle, Wriothesley did not have a military background; his whole career seems to have been that of a lawyer and administrator at Court before becoming involved in politics at the highest level.  He benefited greatly from the dissolution of the monasteries and by the mid 1540’s was one of the largest landholders in Hampshire.  In January 1544 he was raised to the peerage as Baron Wriothesley of Titchfield and four months later was appointed Chancellor.  In his will Henry VIII appointed him to be one of the privy councillors for his nine-year-old son Edward and it was not long before these councillors all had their snouts in the trough.  On the day after Henry’s funeral they began to reward themselves with Wriothesley being elevated to the vacant Earldom of Southampton. 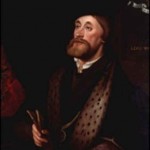 Before looking at Wriothesley’s connections with Christchurch, it is necessary to be aware of a few key events and dates.  At the end of November 1539 Christchurch Priory was closed down and its site together with all of its numerous properties elsewhere were all surrendered to the Crown.  In their letter to Thomas Cromwell the five commissioners wrote: “In the church was a chapel …prepared by the late mother of Reginald Pole for her burial …”.     This, of course, refers to the magnificent Salisbury Chantry which is always admired by visitors to the Priory Church.  Margaret Pole (née Plantagenet) had been created Countess of Salisbury in 1513 and was granted her ancestors’ Salisbury estates which included Christchurch and Ringwood.  In the second week of November 1538 she was arrested at her home near Emsworth by Sir William Fitzwilliam and taken to his home at Midhurst for further questioning before being transferred to the Tower of London where she was to spend the rest of her life.  When Parliament met in May 1539 she was attained as an “abominable traitor” without having had a trial and all of her possessions were forfeited to the Crown.  On 27th May 1541 at the age of sixty-seven she was executed within the precincts of the Tower.  According to a letter written a few days later by the Imperial Ambassador, Eustace Chapuys, the executioner was a novice axe man who “hacked her head and shoulders to pieces in the most pitiful manner”.

It was not long before King Henry started leasing the lands of Christchurch Priory and the Countess of Salisbury to others with Wriothesley obtaining property from both sources.

On 22nd February 1540 Wriothesley was granted a twenty-one-year lease of the fishery on the Rivers Avon and Stour, which had belonged to the Countess of Salisbury, for which he had to pay an annual rent of thirty shillings.  The fishery was defined as being from the stream called Stour Weir and Wild Weir to the sea coast.  The stream must be the Mill Stream with Wild Weir being at the northern end and Stour Weir at Place Mill.    Evidence shows that an estate map of circa 1715 marked a weir named Wild Weir on the River Avon where the Mill stream leaves the river.

A year later on 24th February 1541 he was granted the posts of steward of the manors of Ringwood and Christchurch, Steward of the Court, Constable of Christchurch Castle, Bailiff of the Hundred of Christchurch and keeper of Stourfield Chase and its deer.  For all of these posts he was to receive annual fees totalling £18.0s.10d.  Because of his duties at court, Wriothesley would not have been able to do these jobs in person so he would have appointed a deputy.

When Christchurch Priory was closed down there were twenty-one people receiving either annuities or corrodes from the Priory’s funds, one of whom was Wriothesley and these continued to be paid during the year ending at Michaelmas 1540.

On 1st March 1540 Wriothesley and William Avery were granted for twenty-one years the Manor of Hurn together with the late Priory’s tithes in Christchurch, Hinton, Sopley, Ripley and Milton.  The wording in the calendared version of this document gives the impression that this grant could have included the site of Christchurch Priory.  It seems as though William Avery could have died in 1545 as on 12th July of that year Wriothesley was granted for life the site of Christchurch Priory together with the new house, called Church House, the demesne lands, a fishery on the River Avon and River Stour and other lands belonging to the late Priory within the Parish.  Unfortunately these last two documents are greatly abbreviated in their published calendared form so a lot of detail is missing including the annual rents.  However, documents in the Patent Rolls dated November 1547 and July 1557 give more details including the names of the pastures for which a yearly rent of £73.12s.2d was paid.  The new house in the 1545 grant probably means the Prior’s House which from the description given in the Victoria County History was an imposing building at the time of the dissolution and was ordered to be retained.  The site of the Priory would not have included the church and churchyard as in October 1540 these were granted to the churchwardens and inhabitants of Christchurch as their Parish Church.