You are here: Home>Articles>Significant People>Sir John Millais R.A. (1829-1896) and Christchurch

In Christchurch we are most fortunate to have a large painting by Sir John Millais, “The Widow’s Mite”. This was an early work by the Pre-Raphaelite artist in 1847, now hung in the Priory Church.

Gifted to the Church in 1928 by Mrs. Reeves of Avonmouth House, Mudeford, it was considered a valuable painting. It’s value in 1928 was not less than £5,000 and might fetch £15,000. The Parochial Church Council gladly accepted it as a wonderful possession for the Priory Church. The painting had been hanging in a gallery at Newcastle and had been given by Mr. Hall, the brother of Mrs.Reeves, who lived in Hertfordshire. 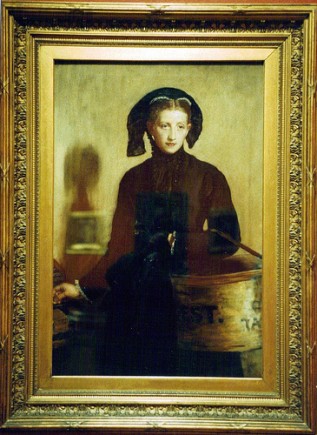 “It is necessary”, the Vicar remarked “to take steps so that no future Vicar may sell it or get rid of it as some Vicars have done in the past”. The Hall family desired that the picture might be preserved for the Priory Church. The dedication of the picture was carried out by the Bishop of Southampton in November 1929.

The painting measures eight feet by five feet and was originally the principal “panel” of a huge composition, showing the widow and child.

The Christchurch Times notes that Mr. Alan Druitt of Willow Lodge, Mudeford, gave a copy of the inscription which he obtained before the picture was hung, and which is as follows:-

“Extract from the Life and Letters of Sir John Everett Millais, by J. G. Millais, Vol. 1, page 38 – In 1847, a competition being invited for cartoons for the decorations of Westminster Hall, Millais sent a large canvas called “The Widow’s Mite”. Except “Pizarro”,it was the only picture which he ever exhibited on conventional lines, the figures in shadow being piled and grouped up to the culminating point, where Christ standing against the blaze of light and addressing himself to St. John, calls his attention to the woman’s act of unselfishness. It was, however, voted intellectually deficient, lacking the true note of grandeur when Millais was left to himself. This big canvas, which monopolised all the available space in his studio, and occupied the young artist the greater part of a year, has as competitors the work of older and stronger men of the day – G.G. Watts, Cope, Armitage, Sir John Tenniel and others, and I am told by a distinguished artist that because she (the widow) held by the hand a little nude child set the critics somewhat against the work, in displaying “such bad taste”. For some years it was exhibited in the Pantheum in Oxford Street. Ten feet seven by fourteen feet three was not quite the thing for “show parlours” of the day, so it was cut up and sold in bits. Mr. Spielman says that one of these sections is at Tynemouth and the other in the United States, but I have since heard that it was distributed in still smaller pieces.”

It seems that the purchase of the painting now in the Priory Church, was probably purchased by Mr. James Hall of Tynmouth, Northumberland. He was a ship owner, philanthropist and owner of many important paintings. He was also the father of Mrs. Reeves.

Millais’ painting was hung in the North Transept for many years, but was moved in 2006 and can now be found by the West Door where it does not seem to be shown to its full advantage.

In 1953 Admiral and Mrs. Reeves (who had then left Mudeford) presented another of Millais’ pictures to the Priory Church. It was a beautiful oil painting called “Christ and the Rich Young Ruler”. This was a companion to the “Widows Mite”. The additional picture was hung in the South Transept.

Millais who lived in Southampton visited Christchurch. He stayed at the premier hotel, The King’s Arms, in 1891. it is not known if he painted any scenes of Christchurch.