In January 1236 King Henry III married Eleanor of Provence and soon after invited three of his mother in law’s brothers, who were sons of the Count of Savoy, to come to England.  In time they were given estates and important posts.  One of these was Peter (always referred to as Peter of Savoy) who was prominent in English politics for more than two decades until he succeeded his nephew as Count of Savoy in 1263.  Another brother, Boniface, became the last non-English Archbishop of Canterbury and his image can be seen locally in a stained-glass window in Wimborne Minster.

In 1252 the King granted Peter the right to arrange the marriage of the young Baldwin de Redvers to whoever of the Queen’s relatives he should choose.  Peter chose his niece Margaret, the daughter of his brother Thomas who had been Count of Flanders in right of his wife until she died in December 1244. 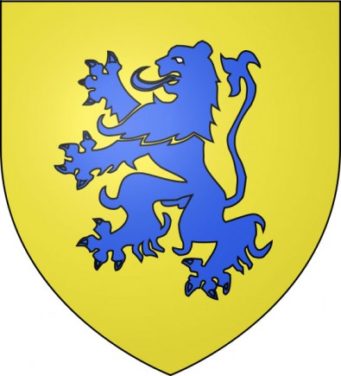 Margaret, however, was the child of his second wife who happened to be the sister of Pope Innocent IV, who was the Pope from 1243 to 1254.  Margaret therefore was a niece of Pope Innocent, a niece of Archbishop Boniface, and a first cousin to Queen Eleanor and a first cousin to the Queen of France (Queen Eleanor’s older sister).  The wedding took place in 1257 when Baldwin was 21, but the bride had not reached her teens as her father’s first wife had died between twelve and thirteen years earlier.

Baldwin died in early September 1262 at the young age of twenty-six with it being in some publications that he and his uncle the Earl of Gloucester had both died of poison after a banquet given by Peter of Savoy (Peter having administered the poison).  Peter, however, was the Uncle of Baldwin’s sister.

Another book, written by a well known medieval historian, refers to Baldwin’s death as murder, but as no further information is given it has to be presumed that he was referring to the poisoning story. When we compare details of the deaths of Baldwin and his Uncle we find that they occurred in different months many miles apart.  The Complete Peerage states that the Earl of Gloucester died on 15th July at Ashenfield near Canterbury and that Baldwin died in France before the 13th September.  The same publication also states that it was rumoured that the Earl of Gloucester was poisoned at the table of Peter of Savoy, but for Baldwin there is no mention of poisoning or even rumours of poisoning.  On 14th July King Henry III had left for Paris to stay with the French King and a document in The Patent Rolls dated four days earlier indicates that Baldwin was to accompany the King.  Looking carefully at these July dates, it could be considered that was a possibility that Baldwin could have dined with his Uncle and his Wife’s Uncle a few days before he was due to leave England and if he had consumed contaminated food he may not have been well enough to travel to France on the 14th.

On reading parts of Professor Powicke’s ‘The Thirteenth Century’ an account of the Royal visit to Paris in 1262 can be found.  All seemed to have gone well until the beginning of September when a serious epidemic swept through the city claiming many lives including those of some of the English guests, but no names were given.  King Henry and his second son Edmund were known to be seriously ill and rumours reached England that the King was dead.  By the end of the month he was out of bed, but his recovery was slow and he was still weak when he returned to England just before Christmas.  Realising that this epidemic coincides with the date of Baldwin’s death it can be concluded that he was one of its victims.  His body was brought back to England and buried at Breamore Priory where his father had been buried seventeen years earlier and where his sister, the Countess Isabella de Fors, would be buried thirty-one years later.

A translation of a footnote in ‘The Complete Peerage’ reveals an extract from one of the chronicles which stated that in 1262 many of the household of King Henry died in France, one of whom was the Earl Baldwin de Insula whose body was returned to England.  As the de Redvers were Lords of the Isle of Wight it is not unusual to find contemporary documents using de Insula as their surname instead of de Redvers.  This document confirms that Baldwin must have been a victim of the epidemic and most probably died in Paris.