You are here: Home>Articles>Significant People>Inoculation and Lady Mary Wortley Montagu

The story of how Lady Mary Wortley Montagu (1689 – 1762) introduced into Britain the practice of inoculation against smallpox has a strong connection with the Christchurch area.  For the first person to be inoculated in this country was Lady Mary’s young daughter, Mary, who would eventually have a home here.

Daughter Mary married John Stuart, the 3rd Earl of Bute, who built the 18th century cliff-top mansion, High Cliff.  On her first visit there in 1779, she commented:  “The mildness of the sea air makes up for the want of shelter, there not being a single tree upon our territory.”  The Butes’ grandson, Lord Stuart de Rothesay, would later build the present HighcliffeCastle on the same estate land.

Lady Mary Wortley Montagu was born in London in 1689 to Evelyn Pierrepont, the eventual 1st Duke of Kingston-upon-Hull who was a member of the Liberal Party, and his first wife, Lady Mary Feilding, herself the daughter of an Earl.  Mary’s mother had three more children before dying in 1692 and the children then lived with their Pierrepont grandmother at Dean House, West Dean, on the Wiltshire / Hampshire border near Salisbury. Following the death of the grandmother when Mary was still only nine, the children returned to the care of their father and moved to Thoresby Hall in Nottinghamshire.  The Hall had one of the largest private libraries in England; Mary loved books and the written word, she was a prolific correspondent throughout her life, wrote poems and books and she could speak French, Italian and understood Latin. 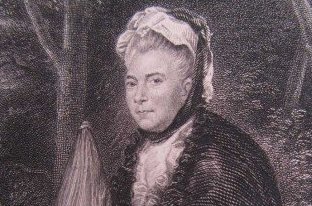 Mary had two suitors, Clotworthy Skeffington, the heir to Viscount Massereene, and Edward Wortley Montagu, a politician.  Mary’s father rejected Edward but Mary and Edward eloped and were married in 1712 at Salisbury.  Their son, another Edward, was born the following year and in 1715 Mary’s husband became a Member of Parliament for Westminster and later was made a Commissioner of the Treasury.  Mary became a prominent figure at the Court of King George I and had many influential friends.

In December 1715 Lady Mary suffered from a most dreadful attack of smallpox, which left her scarred and without eyelashes.  She had been tended by the finest physicians of the time, who were all Fellows of the Royal Society.  The Society had heard of the Turkish practice of engrafting or inoculation against smallpox, where it was claimed that exposure to the disease might bring immunity.  However, this practice had not been tried in Britain.

In 1716 Edward Wortley Montagu became the Ambassador to the Ottoman Empire in Constantinople and the family relocated to Turkey.  Lady Mary sent many letters to her sisters and friends describing the Turkish way of life from the markets to the Sultan’s sumptuous palaces; she began to dress in the Turkish style and learn the language.

Lady Mary gave birth to daughter Mary in 1718. At this time Lady Mary was concerned that her children should not contract smallpox and discussed this with her doctors.  Whilst her husband was away and with the support of an English surgeon, Dr. Charles Maitland, it was arranged for the child Edward to be inoculated with smallpox matter; five days later he was said to be singing and playing, but then a few spots came and went. He had only suffered a very mild form of the disease.

Later in 1718 the Wortley Montagu family started their long journey back to England, and the evil fear of smallpox returned as in 1721 a serious epidemic ravaged England.  Lady Mary was very concerned for her daughter Mary and contacted Dr. Maitland, who was now practising in Hertford, to say that she wished her daughter to be inoculated.  This was done in the presence of three leading physicians acting as witnesses.  Like her brother, the child suffered but a little.    This was the first recorded case of inoculation (variolation) in England, not to be confused with vaccination that came later, pioneered by Dr. Edward Jenner.  After much initial opposition, the practice of inoculating against smallpox eventually became popular – thanks to Lady Mary’s influence.

Lady Mary’s personal life as opposed to her social one was a disaster and she and her husband parted; she spent many years abroad and when her husband died in 1761 her son-in-law Lord Bute, now a favourite of King George III, and her daughter Mary persuaded her to return to England after 20 years abroad.  Lady Mary died from breast cancer in 1762. She is buried in the vault of Grosvenor Chapel, South Audley Street, London.