You are here: Home>Articles>Significant People>The de Redvers Family and the FitzGerald Inheritance

The de Redvers Family and the FitzGerald Inheritance

The second issue of the Dorset History Forum’s Digest contained an article on Blandford’s 19th century links with Harewood House in Yorkshire which prompted me to write an article for the next issue showing that the estate had had very close links with Dorset and S.W. Hampshire six centuries earlier. As this is an expanded version of that article it has been given a different and more fitting title.

For much of the 13th century Harewood House in Yorkshire was owned by members of the de Redvers family who were Earls of Devon from 1141.   The de Redvers holdings included numerous estates in South West Hampshire, including Christchurch, and some manors in Dorset.  The author has analysed the family’s holdings in the old pre-1974 Hampshire and included a simplified family pedigree is in the booklet ‘The Medieval Markets and Fairs of Christchurch’1. 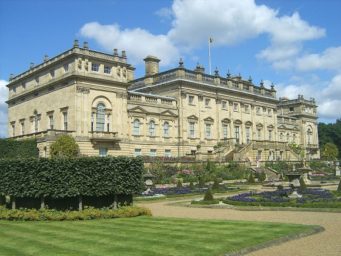 Harewood House seen from the garden

The 5th Earl of Devon’s only son Baldwin predeceased his father on 1st September 1216 and was buried in Christchurch Priory as described in the article ‘The Mysterious Death of Baldwin De Redvers, 7th Earl of Devon’.  By his wife Margaret, the daughter and heir of Warin FitzGerald who was King John’s Chamberlain of the Exchequer and whose name appears in the introduction to Magna Carta, Baldwin had fathered a son, also named Baldwin, who would eventually become the 6th Earl of Devon.  In spite of much searching it is not clear what lands were given to Margaret by her father when she married, neither is it certain all of the lands which she inherited.  However, by researching her pedigree, making lists of lands known to have been held by her various ancestors and comparing them with some of the many de Redvers documents it can be shown that in addition to Harewood, which she inherited through her mother, she inherited manors in at least four other counties.

Within a month of her young husband’s death, King John had forced Margaret to marry one of his Norman favourites Fawkes de Breauté who was also one of the more notorious characters of the time.  This forced marriage of a widow was contrary to Clause 8 of Magna Carta which John had sealed fifteen months earlier, but within three months of the Runnymede ceremony the cunning King had persuaded the Pope to annul the charter, thus precipitating civil war in England.  Following Breauté’s arrest in 1224, Margaret asked for her marriage to be annulled as she had been taken in time of war and married without her consent.  Her request was granted and she reverted to using the surname de Redvers.  Under feudal law the lands Margaret inherited automatically became her husband’s property and these were now returned to her providing she paid a set sum each year to settle Breauté’s debts to the Crown.

Margaret died in September 1252 having outlived her son by more than seven years.  As her heir was her sixteen-year old grandson, yet another Baldwin who would eventually become the Earl of Devon, her lands were granted to Queen Eleanor until Baldwin came of age.  Before her death Margaret had granted land and revenue from parts of her Harewood estate to others.

Her grandson, the 7th Earl of Devon, died in September 1262 and his ‘Inquisition Post Mortem’ lists seven place names on the Harewood estate.  One of them was ‘Swindene Wood’ which is now Swindon Wood.  Two of the manors which the 7th Earl had inherited from his grandmother became part of the dower of his teen-aged widow, another Margaret (Margaret of Savoy, a first cousin of Queen Eleanor), while the remainder of his estates went to his widowed sister Isabella de Fors, Countess of Aumale who then became Countess of Devon as well.

Isabella’s thirty years as a double Countess is peppered with disputes.    Locally, they included a dispute with her sister-in-law at Christchurch, disputes with Christchurch Priory, Breamore Priory, Carisbrooke Priory and Quarr Abbey, and also two disputes in the New Forest.  A dispute relevant to this article was with Edmund, Earl of Cornwall concerning the aforesaid Swindon Wood on the Harewood estate.

In 1272 the death occurred of Richard, Earl of Cornwall, who was King Edward I’s uncle, and before his death he had taken possession of Swindon Wood.  Within a few years Isabella had challenged the right of his son, Edmund the new Earl, to hold this woodland and they agreed to take this dispute to the King who in May 1280 ordered a commission of enquiry.  It appears that the Earl was not satisfied with the outcome so another more detailed enquiry was ordered.  Again the result of the enquiry is not available, but this time Isabella was the dissatisfied party so a third enquiry was ordered by the King who told the Commissioners to ensure that justice was done.  This third enquiry was to be held at Knaresborough, but on the appointed day some of Edmund’s men lay in wait in woods alongside the road and as Isabella’s bailiffs and men approached they were attacked and wounded so that they were unable to give evidence to the Commissioners.

Isabellas’ bailiffs and men approached they were attacked and wounded so that they were unable to give evidence to the commissioners.  This attempt to impede the course of justice was something the King could not tolerate.  Writing from Caernarvon on 25th April 1284, Edward I ordered two judges to investigate this crime.

Margaret FitzGerald’s father had been Chamberlain of the Exchequer, and since the accession of Henry II this post appears to have been hereditary as it had previously been held by his father and his uncle.  Isabella seems to have used this to get her protégé Adam de Stratton appointed as Deputy Chamberlain and later as Chamberlain of the Exchequer.  She then granted to Adam and his heirs four of her inherited FitzGerald manors for performing the duties of this post either in person or by deputy.  Stratton, however, was a rogue and amassed a fortune from his other activities, some of which were illicit; he was even more unscrupulous than Ranulph Flambard, the Dean of Christchurch who commenced building our Priory Church in the 1090’s.  Just like Flambard, he  ended up forfeiting his possessions to the Crown and being imprisoned in the Tower of London, but, unlike Flambard who escaped from the Tower and fled to Normandy, Stratton died in his prison cell within a year of his patron.

Isabella died in November 1293 and as all of her five children had predeceased her without issue, the heirs to her estates were distant cousins.  The remaining estates which had come to her through her grandmother Margaret FitzGerald went to her third cousin Warin de Lisle who was descended from the FitzGeralds.  In 1311 this Warin’s son Robert de Lisle was created Lord Lisle of Rougemont, with Rougemont being one of the place names on the Harewood estate listed in the 7th Earl of Devon’s ‘Inquisition Post Mortem’ nearly fifty years earlier.