The Crippen case involved one of the most notorious domestic murders in British crime history.   On the morning of the 23rd November 1910 Dr Hawley Harvey Crippen was executed at Pentonville Prison having been convicted of the murder of his wife, Belle Elmore.   It is believed that the motive for this gruesome killing was Crippen’s passion for his secretary and mistress, Ethel Le Neve.

The newspaper reports of the day were full of the dramatic events surrounding the discovery of parts of Belle’s dismembered body in the basement of the Crippen home.   At the time Crippen and his mistress had departed for Europe disguised as father and son and subsequently boarded the vessel “Montrose” en route to Canada.   The story was further heightened when it was learned their arrest on board had been made possible by the use of wireless telegraphy which came into commercial use in 1907.

Since the passing of these events questions have arisen concerning Ethel Le Neve’s complicity and her departure into obscurity.

Former Christchurch Mayor, Mrs. Irene Stevenson, spent the World War II years as a qualified Red Cross Nurse and later recounted her experiences in a booklet entitled “The Day Thou Gavest”.   She was on occasions called out to deal with cases involving civilian casualties. Sadly a large number being suicides.   One day in April 1943 Irene was summoned by the Police to Jumpers Corner Tea Rooms (now The Crooked Beam Restaurant) and this is her account of the event:-

“The Crippen case I think most people remember.    One day the Police asked me to go to the café on the corner of Jumpers Road (sic), where there was a woman who had apparently been dead for quite a while.    She had been running the café for some time, catering for the RAF boys mostly from Hurn, where there was always a welcome cup of tea for them and anything else she could get from the black market.    It was because the café had been closed for some days that it was reported to the Police, who went to see what had happened.    They apparently peered through the windows and saw the woman wedged behind the door.    I was called and asked to remove her to the mortuary.    She was extremely dirty and after the Police and I had removed her ragged clothing, I had to wash her for the Post Mortem.    I was complaining about this and said I was a nurse not a mortuary attendant.    The Police said “Do you know who this is?”    Of course I did not.    Whereupon, according to the papers found in the café, she was presumed to be Miss Le Neve, who had come to Bournemouth to live.    Shades of Crippen in the middle of a World War and Stevenson caught up in it.” 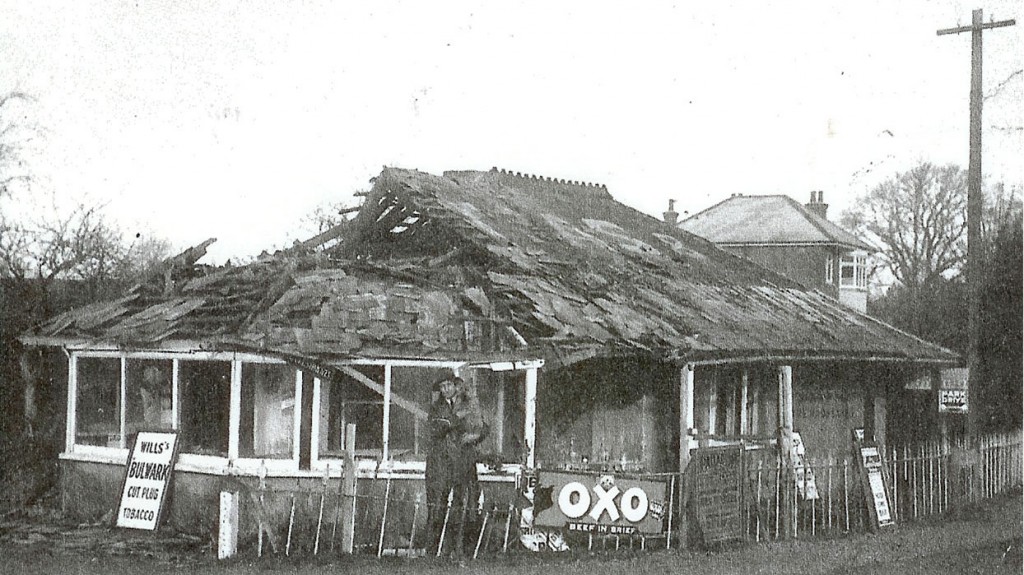 Jumpers Corner Tea Rooms after the Storm in 1933

During a heavy storm in 1933 the Jumpers Corner Tea Rooms suffered severe damage which caused the business to be closed pending repairs.   A photograph taken shortly after the storm shows a lady dressed as a man standing in front of the stricken building holding in her arms a small dog.    This person was reported to be Ethel Le Neve.    Following the events described by Mrs. Stevenson, articles have appeared in newspapers and other local publications giving credence to the belief that Ethel was the proprietress of the Tea Rooms.

In the mid-1950’s the writer Ursula Bloom reported an account of an old woman, living in Hampshire in a house at the edge of a wood, who told a visiting District Nurse that she was Ethel Le Neve and spoke of the “Dear Doctor”.   This story appears to have a Stevenson/Jumpers Tea Room ring about it!

The Crippen story has been a source of interest over the years and various sightings of Ethel have been reported since her acquittal in 1910.    Many bogus “Ethels” have emerged, mostly it would seem promoted by their perpetrators.    Was our local Ethel one of these?

On the 3rd March 1937 a letter appeared in the Christchurch Times under the heading “Notice to Friends”.

“Miss Lilian Vere originally of Jumpers House regrets to say she has been compelled to vacate the Jumpers Lodge Café and Tea Gardens.    She has to record stern (and to her) heartbreaking circumstances.    Her few last possessions have been taken and she is faced with final disaster.    She hopes that any old friends or acquaintances seeing this urgent message may be able to make practical suggestions that will enable her to open a café or tea garden again.    She still hopes for a “day of success” to earlier happy scenes.    Miss Vere and her little Cairn doggie “Kess” had to bid adieu but she trusts not goodbye to the district in which she has lived for over 20 years.    Will friends and acquaintances note that her temporary address is at 84 Purewell, Christchurch.”

Clearly the writer had fallen on hard times.    Her call for help was not at first sympathetically received, judging by a letter which appeared in the same newspaper a week later.

However, Lilian must have found the means of re-establishing herself at the Jumpers Corner Tea Rooms prior to April 1943.     The Mate’s 1940 Directory lists her as living at 2 St. Johns Road, Christchurch, so it would seem she spent less than three further years at the Tea Rooms.

From details recorded on her Death Certificate we learn that Lilian Jesse Vere died sometime between the 14th and 20th April 1943 at Jumpers Lodge Tea Rooms, age given as 61 years old.

Her cause of death was given as “Lobar Pneumonia of the left lung.”    The entry of occupation describes her as Spinster/Café Keeper,    There was a Post Mortem but no inquest into her death.    She was later interred at Christchurch Cemetery.

In his article published in Hampshire Magazine dated February 1991 John Edgar Mann wrote of his visits as a schoolboy to a café on the Iford side of the bridge and being served by a white haired lady who, rumour had it, was Crippen’s mistress.     These visits occurred during World War II and somehow this rumour seems to have crossed the bridge and taken up residence at the Jumpers Corner Tea Rooms.

It is possible, of course, that the lady in question was Lillian Vere who could have worked for a brief period at the Iford Bridge Tea Rooms.     Judging by her unorthodox appearance and the rather unusual tenure of her letter to the Christchurch Times, Lilian Vere seems to have been a somewhat eccentric personality, possibly even an impersonator of Ethel Le Neve.

Did she copy Ethel’s male attire which she wore during her flight with Crippen in 1910?

The story of Ethel Le Neve’s Christchurch connection, supported by local publications, has taken root and become accepted by many as reality.    From documents and letters, (some in the Public Records Office), a Marriage and Death Certificate we now know that Ethel Le Neve married in London in 1915, had two children and died on the 9th August 1967 aged 84.    Her last address was given as 62 Burford Road, Lewisham, and sadly not Jumpers Corner Tea Rooms! 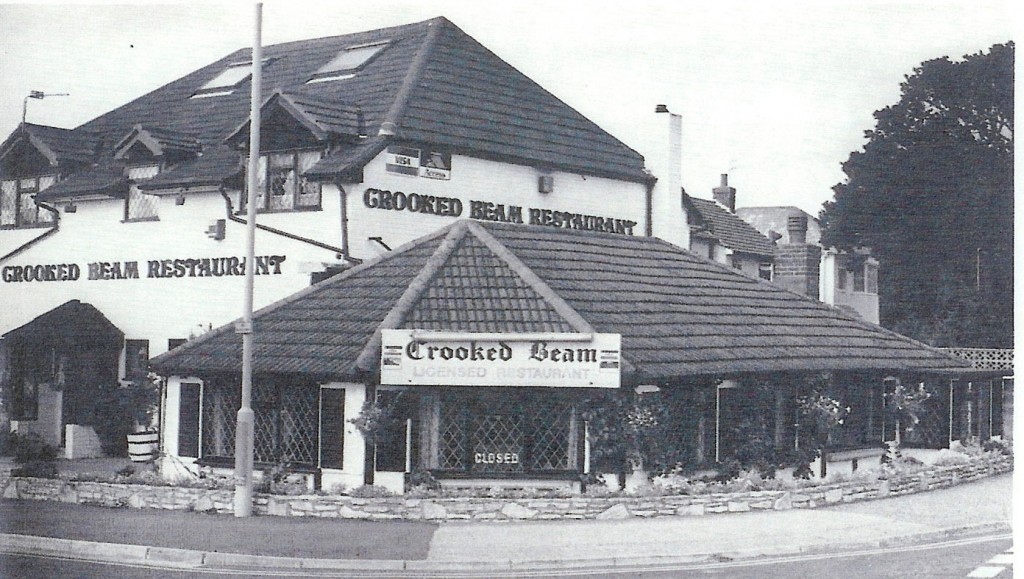 These are the facts we have unearthed concerning Lilian Jesse Vere:-

The 1881 Census return for Fulham lists her as Adopted Daughter, aged 8 months living in a mixed household at 5 Richmond Gardens.

The 1901 Census return for Ilfracombe lists her as Visitor, 20 years old, at 4 Fortescue Road.

The evidence against Ethel Le Neve ever having been at the Jumpers Corner Tea Rooms seems overwhelming.

This is a story which has linked the murderer Dr. Crippen with our town for more than 60 years, but turns out to be no more than a legend.    However, need it be said, legends can be far more seductive than simple facts!