You are here: Home>Articles>Incidents at Christchurch>Pioneer Pilot Dropped In On Highcliffe

Pioneer Pilot Dropped In On Highcliffe

All eyes looked skywards on a summer evening in 1913 when a rare sound was heard over Highcliffe – the drone of an aircraft engine.  Excitement grew as villagers realised that a flying machine was coming in to land on the cliff-top fields.

The pilot, 30-year-old Denys Corbett Wilson, steadied his two-seater Bleriot monoplane and touched down safely on the grass.  Only a few weeks earlier the daring pioneer aviator had made an historic flight over the Jura Alps at thirteen thousand feet in the same plane.  Now, on 18 June 1913 he had gained the slightly less important honour of piloting the first aircraft to land at Highcliffe. 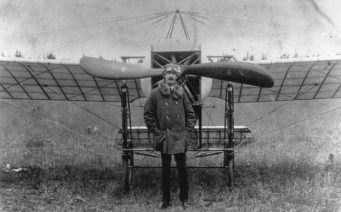 His Bleriot XI-2, powered by a powerful 80hp, seven-cylinder Gnome engine, brought him to Highcliffe in one hop from the Hendon aerodrome near London.  He had decided to pay literally “a flying visit” to a friend, the Hon. Mrs Bellew, who was living at Beacon Lodge, a large house on the cliff just east of Highcliffe Castle.

The nearby fields – now the cliff-top car park and its overflow area – made an ideal landing ground.  As crowds gathered to gaze wide-eyed at the flimsy-looking plane, Corbett Wilson decided it would be a good move to pay some local lads a bit of pocket money to keep watch over it.  One of the boys who earned sixpence a time was Harold Frampton, who became a hairdresser in the village.  The photograph illustrating this article was kindly lent by his son, Dennis, who followed his father’s profession.

What Corbett Wilson did the day after his arrival was described by a Christchurch Times reporter: “On Wednesday afternoon in the presence of many hundreds of spectators, he made an ascent and flew towards Christchurch where he circled round to the west of the railway station, over the recreation ground to the south of the church, then headed over Stanpit back to Highcliffe.

“Being at too great an altitude, however, to descend upon the field from which he started, the airman circled round overhead and then went east as far as Barton Court.  He then turned, and shutting off his engine, made a graceful decent within a few yards of his starting point.  He was accompanied by a male passenger.” The Christchurch Times report goes on: “Today (Friday) about noon he made another ascent in a similar direction, accompanied by Miss Bellew.  On both occasions the flight was considered very successful, no difficulties being experienced.”

The Bleriot was based on the cliff top for at least a fortnight, with Corbett Wilson making other flights, including crossing to the Isle of Wight to give displays in front of cheering crowds.

People living locally had already enjoyed seeing many different planes in the air during the Bournemouth International Aviation Meeting held near Hengistbury Head in 1910 – the event at which Charles Rolls, co-founder of the Rolls-Royce Company, became the first British aviator to be killed in a plane crash.

In Highcliffe in 1913, however, local folk came to regard Corbett Wilson’s Bleriot as their own flying machine.  A postcard sent from the village on 1st July to a Mrs Johnson in Chesterfield had this jokey message: “Glad to say your mother is better today.  She was very tired after the journey.  I don’t know if she will go off flying tonight as we still have our machine on the cliff.”

Corbett Wilson was the only son of a wealthy family who live in Surrey and later in Ireland.  His father, “Carlos” Wilson was a successful barrister.  His mother, Ada, whose maiden name was Corbett, was Irish.  After schooling at Eton, he served in the army in South Africa during the Boer Way.  In 1911, a couple of years after Louis Bleriot made the first flight across the English Channel, Corbett Wilson enrolled at the French aviator’s flying school at Pau in southern France.  He gained his “wings” and promptly bought himself a single-seater Bleriot XI.

His most outstanding adventure in this aircraft came in 1912 when he made the first ever flight across the Irish Sea.  After setting out from Fishguard, Pembrokeshire, he ran into a squall, his engine began to misfire and his compass became erratic, but he managed to touch down safely near Enniscorthy, Co. Wexford, after a flight of 1 hour 40 minutes.

As World War I loomed, Corbett Wilson joined the military division of the newly formed Royal Flying Corps.  He served with great heroism in France, carrying out reconnaissance flights over enemy territory and going on bombing raids.  Sadly his war lasted barely ten months.  On 10 May 1915 his Morane aircraft was hit by enemy flak and crashed.  Corbett Wilson, who was 32, and his 18-year-old observer, Second Lieutenant Isaac Newton Woodiwiss, were both killed.

While serving in France, Corbett Wilson had sent many letters to his widowed mother giving a remarkable insight into the developing war and the early use of aircraft in battle.  These are featured in a book published in 2006, Letters From An Early Bird, The Life & Letters of Denys Corbett Wilson 1882-1915, by Donal MacCarron.