On Christmas Eve 1958 Sopley Park (Grindles Field) was the scene of the disastrous Britannia air accident which has been described in the “Winkton Tragedy.”  However this was not the only event to have occurred in the Park which involved an aeroplane and a fatality.

On Friday 8th March 1918 Claude Barrington, a Lieutenant attached to the Royal Flying Corps, took off from an undisclosed Airfield on an assignment to deliver his aeroplane to a base somewhere in the South, possibly Gosport.  The Aircraft was a single engine biplane fitted with a four bladed propeller.  I believe this to have been one of the BE 2 series of fighter aircraft produced in large numbers by the Royal Aircraft factory at Farnborough.

During the flight Barrington became confused as to his whereabouts and on reaching the Sopley area just prior to midday he spotted what appeared to be a suitable landing area and with little difficulty made a successful descent into Sopley Park.  After coming to a halt he allowed the aircraft’s engine to run for about half a minute during which time he spotted a man at the bottom end of the Park and beckoned to him.  As the man did not immediately approach, Barrington switched off the engine.  It was then that a number of people, staff from the Kemp Welch residence, appeared and began to crowd around the aeroplane.  Fearing for their safety and possible damage to his plane the pilot urged the crowd to keep their distance. 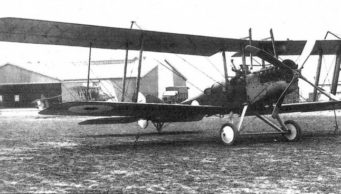 A Royal Aircraft Factory BE2

Having established his location the pilot gave instructions for two men to hang on to the wing spars, at the same time directing a third man how to operate the starter switch.  Over a period of some minutes Barrington attempted to start the engine by process of  swinging the propeller.  This proved difficult as the throttle had been left almost closed in order to prevent the engine from starting up with a sudden roar.  The engine eventually fired, at the same time the person holding the right wing spar released his grip and the man holding the left wing spar pulled hard thinking to prevent the aeroplane from moving forward.  This had the effect of causing the plane to swing to the left.  Directly he saw the engine had fired Barrington dived under the wing in an attempt to restrain the aircraft’s movement.  However before he could reach the cockpit the machine had executed a half circle and this resulted in the propeller striking a young woman standing nearby.  At the same time a Mr. Fletcher of Winkton was knocked to the ground but fortunately escaped injury.  Another member from the Estate had a narrow escape when his pipe was knocked from his mouth!

The woman, Annie Veal, suffered lacerated wounds to her neck and vertebrae with compound spinal fractures, these injuries were to prove fatal.  On seeing the victim lying on the ground the pilot directed two boys to fetch a Doctor and also the Police.  Thinking the girl was only unconscious he checked her pulse but quickly realised she was already dead.  The Doctor, James Hall Walker, soon arrived at the scene and after a brief examination declared Annie Veal to be dead.

The following day an inquest was held at Sopley Park on the body of Annie Veal, housemaid in the employment of John Kemp Welch, JP.  Dr James Hall Walker of Christchurch said he was motoring through Sopley at 12.45 pm on the previous day when he was stopped and told of the accident.  He went quickly to the Park where he was directed to an aeroplane and lying beside it covered with a rug was the body of a young woman.  He then elaborated on the nature of the wounds which were the cause of death and consistent with the account he was given that the deceased had been struck by the aeroplane’s propeller.

Lieutenant Barrington then gave his account of events.  He was asked by Superintentent Knox of the local Police whether during the course of trying to start the engine he had not insisted on the spectators keeping clear.  Witnesses said he had not noticed them getting so close as he was engaged in swinging the propeller.

Mr James Murray, head gardener at Sopley Park, stated he had heard the pilot ask two men to hold on to the machine.  He was directed to work the switch while the pilot swung the propeller, this took about ten minutes before the engine started.  His cap was blown off and the next thing he saw was the body of the deceased under the machine.  Murray stated there were between twenty and thirty spectators at the scene.  He had heard the pilot ask the people to stand clear.  The witness said he was standing beside the machine, the switch being positioned on the outside.  He was then asked by the Foreman of the Jury why he did not switch off when the aircraft started to move.  Murray replied he was only doing what he was instructed to do.

After some deliberation the Jury brought in a verdict of Accidental Death.