Anyone who chanced to be walking along the cliff top at Highcliffe or Barton during the afternoon of 20th June 1952 may well have witnessed a near tragic event. Gazing seaward they would have seen a single engined aircraft make a shallow approach and come down into the sea approximately one and a half miles distant from the shore.

A few minutes prior to this event the pilot had put out an emergency call reporting engine failure and would be ditching his Barracuda Aeroplane in Christchurch Bay.

The aircraft, a Navy Barracuda had taken off from the Royal Naval Air Station at St. Merryn in Cornwall. The plane was piloted by Lt. Albert Stanbridge, aged 26, and carried two crew members, Midshipmen Thomas Penfold and Francis Kirk, both aged 19.

Lt. Stanbridge later described how the plane’s engine had failed involving a fire, forcing him to ditch the aircraft. All three managed to scramble out of the plane having retrieved their rubber dinghies which they were soon able to inflate. They remained floating for some fifteen minutes before their attention was drawn to the sound of an approaching aircraft coming from the Solent direction. This was a Supermarine Sea Otter seaplane which had been alerted to the scene.

The seaplane having landed taxied close to the crew who were able to scramble aboard.   However, now with its additional burden was unable to take off.   The pilot set out to taxi towards Mudeford but unfortunately grounded on a sand bar.   Meanwhile observers ashore became aware of events and the local Police notified.

Sgt H G Somerville and PC F Dudman proceeded to the seaplane in a dinghy and were able to convey the men ashore to a waiting Ambulance which took them to Boscombe Hospital for treatment for shock and exposure. 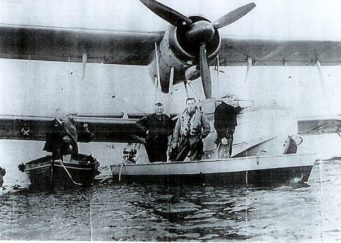 The boat which towed the Sea Otter. In the boat left to right Bert Bosbury, the pilot, and Bill Burbage

About this time two Council workers, Bill Burbidge and Bert Bosbury, made their way to the seaplane in a salmon punt and successfully towed the aircraft off the sand bar and out to sea.   It then took off and headed for the Solent.

Local people watching events were attracted by the appearance of other aircraft which began circling the scene. They included a four engined Liberator complete with under slung lifeboat, several Seafires, Barracudas and a Sunderland – a rare spectacle!

Lt Stanbridge was able to ditch his aircraft much helped by its low speed, thus avoiding the usual hazard of flipping over on impact, and a calm sea but had shown great skill in avoiding injury to all on board.   The three men were able to return to St Merryn no worse for their experience.

The Barracuda crew were attached to 750 Squadron which was an Observer Training Squadron. The two Midshipman were in the process of being trained in the use of radar as Air Observers and were probably fully engaged in this training at the time of the accident. 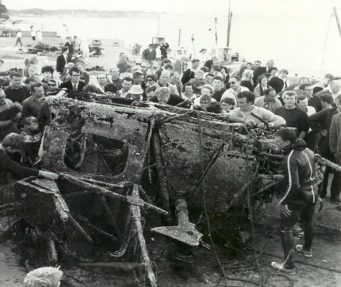 The Wreckage on the Quay at Mudeford

Over the years there were incidents of fishermens’ nets becoming entangled in the wreckage of the Barracuda.   In February 1981 with the assistance of local divers part of the wreckage was raised and brought by boat to Mudeford Quay, where it attracted the interest of local people.

The aircraft, Reg. No. RJ762, was a Mark III Fairey Barracuda single engine high wing monoplane. It retained the Merlin 32 engine of earlier marks. It was equipped with ASV radar, the large radome under the fuselage being a feature. It had a low stalling speed having been designed mainly for Carrier born operations. The Mark III version appeared in 1944 and was in use with the Fleet Air Arm up until the mid fifties.