You are here: Home>Articles>Buildings in Christchurch>The History of Christchurch Cemetery

The History of Christchurch Cemetery 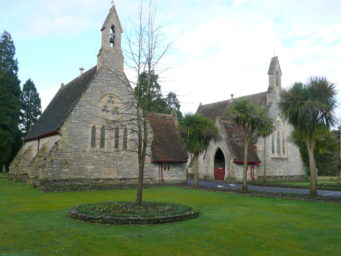 Recently an unusual property was offered for sale by a local Estate Agent on instructions from Christchurch Borough Council. This was the Cemetery Lodge, a Grade II listed building and part of the small complex of buildings forming the entrance to the Cemetery in Jumpers Road.    Mr and Mrs Percival Tarrant the Cemetery Superintendent and his wife who, with their old English Sheepdog, were the last occupants of the stone Gothic Lodge.

Early in 1855 a proposal was put forward by the Christchurch Burial Board for land to be acquired for the purpose of future burials in the Parish, owing to the Priory Church Burial Grounds rapidly running out of space.    At a Burial Board meeting held at Union House, which is now The Red House Museum, on the 8th December 1855 it was proposed that two burial grounds were required for this large and scattered Parish. Subsequently the Board  became engaged in the task of finding suitable sites, one at each end of the town. This search resulted in a site in Street Lane (now Somerford Road) a short distance from Purewell, and the other being on the southern side of  Fairmile Road bordering on Lord Malmesbury’s plantation known as Grove Corner.

Advertisements were placed for plans of the necessary buildings, together with estimates of cost. However, on the 22nd December 1855 the Board suspended their invitation to Architects and others following doubts being voiced over the requirement for two Cemeteries. A choice had to be made and it was therefore decided to put the matter to a vote by the Parishioners.

On the 5th April 1856 the following article appeared in the  Christchurch Times:-

“On Monday at 1 o’clock, the polling of the Parish upon the question “where shall it be, the East or West side of the town?” was reopened by Mr. Lemon, as Chairman. Since the adjournment from the preceding Thursday, those who advocated the West side had been very active in promoting their views. On Saturday evening a small handbill was issued calling upon the Parishioners to vote for the West. During the afternoon of Monday the town was quite alive approaching almost to as exciting a state as a Church-rate contest, or Parliamentary Election. Ratepayers from the country flocked in from both sides, the majority of these countrymen were evidently influenced in favour of the particular side on which they happened to reside. Many unfortunately, who on tendering their votes, found them refused on the ground that they were rated under the Small Tenement Act, and  consequently were debarred from voting on parochial matters. We are sorry to see so many coming from a considerable distance and losing part of a day’s work for no purpose. Towards the latter part of the day the struggle became quite warm, though friendly; the Western side evidently having the advantage as to “whippers-in” or perhaps we ought to say in this case, “beaters-up” or “lookers-out”. It was rather amusing to witness the canvassing of both sides. East saying to one voter “You’ll vote for the East I’m sure, remember the Wise Men came from the East”; “True”, replied West, “but in doing so they must come to the West”.

Some time before the Poll closed it was evident the Westerns would carry it by a considerable majority. At 7 o’clock the Chairman read the amendment proposed by Mr. Aldridge “That the West side and the piece known as Grove Corner presented the greatest advantage for the Cemetery and declared it carried by a large majority, the result being for the West 359, for the East 195, the majority of votes for the former being 164”. This statement was received with much cheering.    The Government Inspector has now to examine the ground and report as to its fitness for the purpose of a Cemetery.

After some discussion the Parishioners agreed that an approach should be made to Lord Malmesbury with a view to acquiring the land at Grove Corner. However this approach was not without its critics. On the same day the following letter appeared:

“To The Editor. Sir, whilst approving of the site chosen by a  majority of the Parishioners for our new Cemetery, there is one particular which we as ratepayers should keep in view; viz. The price asked for the ground, which in this case I think to be enormous, £400.! Everyone knows the value of Grove Corner is far below the price asked by the Agents of Lord Malmesbury and that it would not command under any circumstances a rental of more than £10 per annum……….. Suggest Burial Board endeavour by all means to obtain the rent at a fair valuation price. I expect to see that Parishioners do not pay more than 20s for their poundsworth. Signed.  Resident”.

Whether this was a majority view is not clear. Nevertheless approaches were made to Lord Malmesbury with a view to acquiring the land at a reasonable rent.

As was necessary the subject of the consecration of the new Burial Ground was raised in the House of Lords in June 1856. It was put to Lord Malmesbury that he might be able to assist in the cost of building and a debate between him and several of the Bishops ensued. Lord Malmesbury stated he lived in a large Parish which was so extensive as to require it necessary to provide three Cemeteries instead of one. This would require six chapels having to be built which he could not support. He had offered a piece of land for the purpose of a Cemetery but he could not afford to build a Chapel. He then went on to ask one of the Bishops present if he would consecrate the Ground as a place of burial. The Bishop declined on the ground there being no Chapel on the site.

Anxious to press on with their plans, the Burial Board approached  Benjamin Ferrey, the celebrated local Architect, to submit plans for the  Chapels, Lodge and general arrangement of the Burial Ground together with estimates of costs. Ferrey duly produced drawings in the Gothic style of his mentor Augustus Pugin. On Monday 8th September 1856 these plans were submitted to the Burial Board for approval. That which was unanimously  approved of were the Episcopalian and Dissenting Chapels with covered archways to each, and the Lodge which was presented with a covered archway and rooms on each side for the use of the Ground Keeper.

At a meeting of the Parishioners on the 6th December 1856 the amount required to build the two Chapels and Lodge was discussed. It is not known whether Mr. Ferrey attended this meeting. A cost of £2,000 was given as an estimate to complete the task.

Later it was suggested that the Chapels should be enlarged and instead of a Bell turret being erected on the Episcopalian Chapel and a Cross on the Dissenters Chapel, both buildings should be fitted with Bell turrets exactly alike. This was agreed upon.

On 5th May 1857 the foundation stones of the two Chapels were laid by the wife of Admiral Walcott, MP, assisted by Mr. Ferrey, in the presence of the Admiral, Lord Malmesbury, the Vicar and clergy of the Established Church and a number of Dissenting Ministers.

At a meeting of the Burial Board held on 6th June 1857 Mr. Argyle, a Roman Catholic, complained that no Chapel had been provided and no part of the Ground been set apart for those professing his Faith. It was agreed by the Board that the Dissenting Chapel could be used by Roman Catholics and part of the Unconsecrated Ground set aside for members of that faith, to which Mr. Argyle expressed satisfaction.