Few buildings in Christchurch can have ended up with a use so far removed from their original purpose than the old theatre in Somerford Way. It was destroyed by fire in 1975 while being used by a firm making industrial water coolers.  From 1951 to 1958 it had served as the De Havilland Aeronautical Technical School for apprentices from the nearby aircraft factory along Somerford Road. The apprentices often worked at lines of lathes set up in what had opened in June 1938 as a purpose-built theatre.  Copies of the original plans drawn up for a local builder, W. Bryant, show a building 110 feet by 42 feet (33.5 metres by 12.8 metres with a raked auditorium capable of seating 360 people.  At the front end of the building was a foyer with an office and cloakrooms.  Behind the stage were four dressing rooms and a large store room.

The Christchurch Garden Theatre, as it was first named, was founded and funded by members of the Rosicrucian Order Crotona Fellowship.  This group was an offshoot of the Order Of Rosicrucians, an esoteric movement dating from the 17th century which had its roots in several occult traditions and also links with Freemasonry. 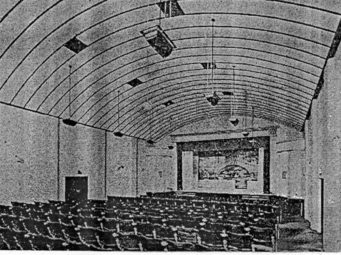 The Fellowship was founded in 1911 by George Sullivan in his home city of Liverpool. A local group was formed in Christchurch in 1930 and met regularly in the King’s Arms Hotel.  In about 1935 the group put a wooden building in the grounds of one of its members, Catherine Chalk, who lived on the corner of Somerford Road and Somerford Way.  This building known as The Ashrama, served as a meeting place and a little theatre.  Following this venture, it was decided to move the Fellowship’s headquarters from Liverpool to Christchurch and to build a more substantial theatre.  Dr Sullivan joined several Fellowship members who already had their homes in Somerford Way.

At the Garden Theatre’s official opening in 1938 it was described not only as the first Rosicrucian theatre in England but the first theatre in the borough of Christchurch.  Dr Sullivan, who wrote plays and performed under the name of Alex Matthews, made it clear that the theatre would be available to outside groups as well as Rosicrucian Players.

Performing the opening ceremony, Mayor Henry Lapthorne said: “Christchurch has shown considerable conservatism in the past and I think it shows great courage on the part of the (Rosicrucian) Society in constructing this theatre.” 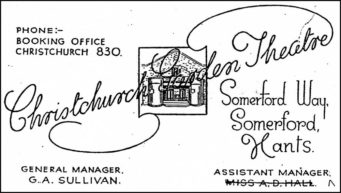 It turned out that the Rosicrucians’ courage was not rewarded by the “conservative” people of Christchurch.  The lack of public support for the theatre was reflected in the Christchurch Times, whose reviews of the stage performances included phrases like “enthusiastic, though a small audiences” and “worthy of greater patronage”.

Part of the problem may have been the Rosicrucian connection, with people wary about what some regarded as a “secret society”.  It seems whatever the Rosicrucians tried out to draw in the public — Shakespearean plays, musical comedies, films and lectures — was met by apathy.  Within two years of opening, the theatre was closed.  And following 60-year-old Dr Sullivan’s death in Christchurch in 1942, local membership of the Fellowship he founded began to fall and eventually the centre of its activities moved from Christchurch to Southampton.

Although the theatre building is gone, it has played a remarkable role not only in local history but also internationally.  Among the Rosicrucian Players was a small group who formed a coven of witches.  Gerald Gardner, a retired colonial civil servant, joined them after moving to Highcliffe in 1938.

Gerald went on to take a leading role in the modern revival of witchcraft — often referred to as Wicca — and today there are thousands of followers of  Gardnerian witchcraft across Britain, Europe, North America, Australia and New Zealand.

The leading authority on pagan religions in Britain, Professor Ronald Hutton, has described modern pagan witchcraft as “the only religion England has given the world”.  It’s all a far cry from the theatre that once stood in Somerford Way!