You are here: Home>Articles>Buildings in Christchurch>The Carving of the Saxon Cross erected in Saxon Square, Christchurch

The Carving of the Saxon Cross erected in Saxon Square, Christchurch

With the redevelopment of Saxon Square in the early 1980’s, it was decided to erect a granite Saxon Cross.      The Cornish Sculptor Morley Eathorne from Four Lanes, Redruth, Cornwall was commissioned to produce a granite cross to be erected in Saxon Square, Christchurch.  Granite is a legendary tough stone to carve but Morley Eathorne had the considerable expertise and experience necessary for the work, but never the less was a colossal job and he was, rightly, very proud of it.    Born and bred in the village of Four Lanes in Cornwall Morley became a monumental mason specialising in granite and he lived there until his death in 1995. 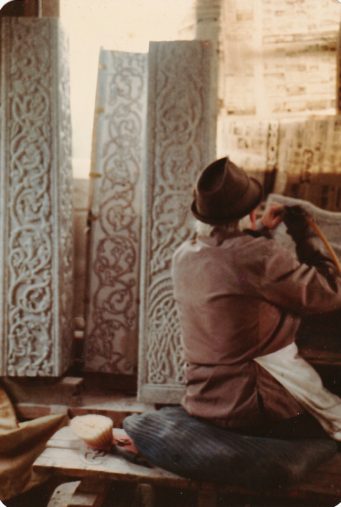 Another stone mason, Mabe Burnthouse quarry man, Rex Pascoe, quarried and prepared the blocks of granite for Mr Eathorne.  They chose the granite pieces together.  After the stones had been cut they were transported to Mr Eathorne’s workshop in Four Lanes to be carved.

The design for the cross was posted down to Mr Eathorne to use in the transcription onto granite.  The drawings were to scale less than half full size.  Sections were selected and enlarged to full size enabling the pattern to be traced onto the respective granite face. 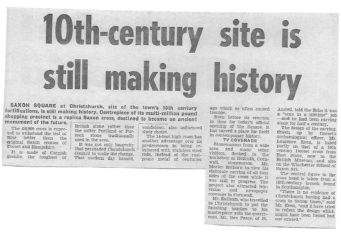 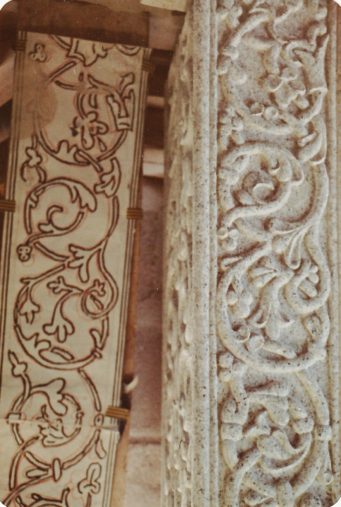 For the tracing to show on the granite face a mixture of glue and a water based ‘paint’ was applied to the granite’s surface and allowed to dry.  This left the surface in matt white ready to receive the tracing from which to work.  When carving was complete the ‘paint’ was removed easily by brushing off with water.   The most delicate part of the carving and the one requiring the most concentration was the section at the base of the lowest stone, the Celtic knot design.  This was because of the ‘under’ and ‘over; effect of the knot. 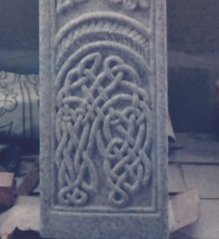 Another tricky part was the continuation of the pattern between the lower and top stones.  Due to the height, it was not possible to assemble the pieces before the whole cross was erected in Saxon Square so Morley Eathorne had to take his measurements very carefully.  When the cross was finally erected the pattern continued perfectly, quite an achievement.

Three of the parts of the Saxon Cross in the workshop

Having completed the carving the three pieces had to be moved from inside the workshop onto the back of the lorry used for transportation to Christchurch.  This was done manually with the use of soft surface rollers on a series of timber supports, gently guiding the pieces through two doorways and at various angles.  The timber supports were so placed that the stones could be stacked flat onto the back of the lorry.  They were then wood wedged to prevent movement and protected with hessian sacking for the duration of the journey.

The erection in Saxon Square was with the use of a crane.  Each part was assembled using a cementitious mixture and non-ferrous metal dowels were used to join them together utilising holes drilled previously in the workshop and the finished product is something of which Morley Eathorne and his family should be extremely proud. 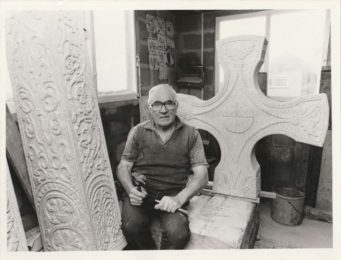 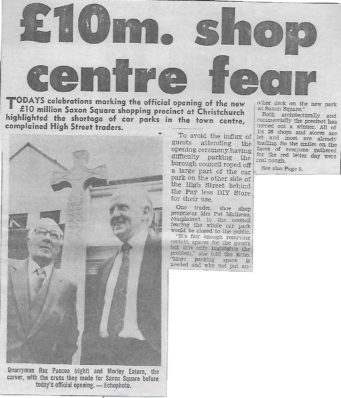