This article appeared in the Christchurch Local History Society Journal in 2006 and is based on several people’s input but especially Barry Coleman, a Member of the Society, who owned Bosley Farm and had lived at Bosley Farm for over fifty years at that time and justifiably proud of his home and the work he has done to keep the Grade II listed building in good condition.

Bosley Farm is situated in River Way, Christchurch, but in the not too distant past it stood on its own.   During the 1930’s there were a lot of sales of plots of land on the so called “Bosley Farm Estate”, and there are a number of pamphlets advertising various sales in the Christchurch History Society Aarchive.

The property is a very short distance from the River Stour and before modern building it would have had river frontage with the land sloping down to the river. For those who are map experts the grid reference is 4138 0952.

The earliest known recorded reference to Bosley, is in a grant of circa AD 985 by King Ethelred, to Selfric his priest, of a mansa of land at three places: half was at Borstealle (Bosley), and the rest at Haestandic and Cnollam. This grant is in the first cartulary of Christchurch Priory (f, 27v.), which was compiled in 1312. (cott. MS Tib D. vi, printed in Dugdales monasticon vi 304).

When the Domesday Book was compiled in1086 Bosley (Bortel) was held by Alnoth the priest from the King and valued at ten shillings.

The present house appears to be a 17th century, or earlier, two ground floor, two first floor room, cottage of cob wall and thatched roof. It has been altered by moving the front door at some time in the 1920’s or 1930’s. There are brick chimney fireplace structures at each end of the building and that to the south has a large inglenook once with a bread oven.

There is a lot of evidence of previous habitation on the site mainly due to the finds which have been made in the garden. Particularly when a kitchen extension in 1980 was constructed which uncovered a ditch seemingly parallel with the northern boundary of the site. It appeared to have been used to dump material.

Some Occupiers of Bosley Farm

Hanging in the hall at Bosley Farm is a photograph taken in 1908, the people in the photograph are Robert Hayward, who was 75 years old at the time and his wife Eliza (65). The girl in the picture is their daughter Gertrude Louisa, born at Bosley Farm in 1888. The family ran the farm as a small holding of about forty acres, with a few pigs and cows and they also  supplemented their income by offering Cream Teas.    It is understood that they died between 1914 and 1918.

In 1920 Bosley Farm was sold by Lord Malmesbury to F. W. Welch for £1100, completion being on the 12th May. In April 1921 the following article appeared in a local magazine “The Bournemouth Magpie” which   pictures a different lifestyle from today.

In April 1921 Bosley Farm was one of the most attractive and most pleasant half-holiday haunts in the county. Mr. F. W. Welch, M.S.P.B. A., of local horticultural fame, had converted the whole of Bosley Farm, consisting of some thirty four and a half acres, into an artistic set of tea gardens laid in the centre of a huge modern poultry farm, where visitors are free to roam at will and inspect all the various methods adopted in up-to-date poultry-keeping—undoubtedly one of the most fascinating   present-day hobbies. 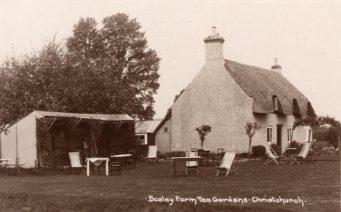 Situated under St. Catherine’s Hill, Bosley Farm stands in a most charming and, at the same time, easily accessible locality. But a few minutes from Iford Bridge and Jumpers on the one side, and about five minutes from the famous Rhododendron Forest on the other side, this spot presents a most pleasing picture during the spring and summer seasons.

The high summit of  St. Catherine’s Hill suggests to the mind a touch of Switzerland, while towards the south lies a flat stretch of meadow and river, taking the mind with one swift turn to Holland. At the foot of a large stretch of the tea gardens runs the River Stour, but travelling westward the ground gradually rises, until one gazes down upon the river some twenty to twenty-five feet below.

The lawns and flower gardens were thrown open to the public daily, except Sundays. Refreshments were served at all hours, but a special feature was afternoon tea. Pretty little occasional tables, with enamel tops, and artistic china in pleasing harmony are dotted here and there, and visitors were invited during their stay to add to the pleasure of their visit by making a leisurely inspection of the semi-intensive houses in which hundreds of our little feathered folk first see the light of day.

It was possible to see sixty pretty little chicks which, although very lively, could only boast an age of about forty-eight hours.     Mr Welch had many important breeds, including White Wyandottes, White Leghorns, Anconas, Black Mendel, Light Sussex and Rhode Island Reds. He also had a large number of White Runner ducks.

Proceeding across one of the large lawns, one might have seen in the distance, trooping towards us two by two, a long line of ducks, giving an impression for all the world like a special march out.   They were making their way straight home after their visit to the water, quite a lengthy distance away. But were only one or two of many little features that would have favourably impressed the visitor. It should be added that there is also a spacious tea shelter, in which teas are served, and which, incidentally, serves the double purpose of proving a fine protection from a sudden shower.

During the Second World War, the outbuildings of Bosley Farm, acted as a Wardens Post and Fire Watching Station. Fire watching, as it was called, became compulsory from the 31st December 1940. Fire watchers were civilians who were up one night in five to watch for incendiary bombs. They reported where the bombs fell, by telephone, to the ARP Control Centre at the Town Hall building.

By 1955 the building had become very dilapidated and Barry Coleman’s father bought the property with the intention of converting it into a Public House. Sadly he died before anything could be accomplished and Barry inherited the cottage where he has lived since 1957.

Barry writes “My late wife, Dena and I, have lived at Bosley Farm since 1957. we first lived in a caravan as the cottage was in need of extensive renovation. It was during this renovation that the first of the finds were made. We moved into the cottage in 1960.

In 1980 we had contractors in to build an extension at the back of the cottage. The day before the builders were to put in the concrete floors, I dug up a considerable amount of medieval pottery.    I laid them on a bench and they covered it from end to end. The date of the shards was later confirmed as the 9th to the 14th century, by the archaeologist, Professor David Hinton of Southampton University.

The soil dug out for the footings of the extension was to be removed by the contractors, but I decided to retain it and sieve it all. The huge mound stood about eight feet high and at its base thirty feet in diameter. I found many more shards and metal buttons, but the best artefact was at the bottom of the pile. It was a beautiful flint axe. It was authenticated by Professor Steve Channon of Southampton University, who said it was a Neolithic axe and about 6000 years old.”

There were also some shards of what could be Durotrigian-Iron Age-Roman British ware together with a broken quern stone of a non local, possibly imported stone.

Other interesting material includes: a pig of lead, perhaps from Mendip, divided into segments to aid the removal of sections for use; a wool weight; broken small thin glass bottles.

The remains of glass, pottery shards, clay pipe bowls and stems may indicate there was once a beer house at or near the site. The excavation to build the extension revealed what appeared to be burnt clay. Hence perhaps an earlier thatched building was burnt down on or close to the sight.

There were also modern finds including: metal buttons, Georgian coins, jettons, keys, metal axe heads, spoons, military buckles -possibly World War I. Some of these materials may be due to the use of St Catherine’s Hill for training RHA gun teams from after 1794 to before 1914.

What an incredible amount of things to find in your back garden. It is obvious that some sort of habitation has been at Bosley since pre history and one wonders what else could be found in the area. Perhaps the Romans came up the river and unloaded the materials they needed, to build their watch towers on St Catherine’s Hill, at Bosley. This could be the answer to a lot of the later finds as there has been a lot of activity on the hill over the centuries.

Finally in the back garden there is a well identified by Morley Hewitt (owner of Rockbourne Roman Villa), as being of Tudor Date, but possibly a Tudor rebuilding of an older well.

Bosley Farm now finds itself surrounded by housing of all types. and there is concern that in the end the cottage will be pulled down and the land developed. This is the main reason for his own recent planning application which I understand was turned down. As the building is listed and of considerable historical value this must be the right decision now and in the future.